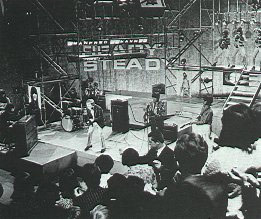 We record “5-4-3-2-1” at Abbey Road Studio 2. Francis, one of the producers of “Ready Steady Go”¹ is in the studio observing, perhaps checking to see if we can deliver what is required.

Francis asks whether the harmonica ‘chukkas’ could carry on while Paul sings the vocal line as it sounds a bit bare when the harmonica rhythm stops. I look at him in astonishment.

Do I really need to tell him how the human breathing mechanism works? Paul is a good harmonica player, but not an Indian guru or magician. I am wondering “How did Francis ever get to any position at all in TV if he couldn’t understand the bleeding obvious?”

I patiently explain to him that since Paul is playing the ‘chukkas’ and he has only been blessed with one mouth, he cannot play using his ‘one’ mouth on the harmonica and sing at the same time. He looks at me puzzled, and then the engineer says, “Why don’t we put them on separate tracks?”

I know what tracks are: tracks are what animals make in the sand; what footprints leave in the snow; tracks are the metal things that trains run along; tracks could be left by tears on a face. One might put something on a fast track to get somewhere faster but surely this can have no possible relevance to making a record.

Yes I do know what tracks are.

He is talking about tracks on recording tape. A piece of brown tape that looks smooth actually has four separate recording ‘tracks’ on it; it is possible to play stuff up to four times, separately and in time. Amazing!

At that moment I have my first inkling that the process of making records is not just playing live into a microphone.
On the first TV showing of “Ready Steady Go” we mime to the recording on Friday night. On Monday night at the Marquee club, while carrying our equipment down the stairs after the gig, someone says that “5-4-3-2-1” is number 29 in the New Musical Express chart after only two days’ sales. I find myself running down the stairs, shouting and yelling at the top of my voice, with an enthusiasm that I am now unable to demonstrate. This enthusiasm has been r