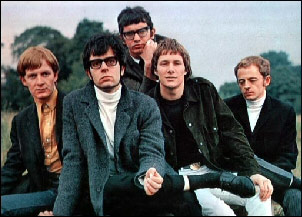 Often at gigs young girls faint with the heat and the crush, and have to be carried out by security people. Their skirts ride up over their hips as they are carried out and at first my instinctive reaction is to look at the girls’ legs and underwear. However after some time and against my natural instinct I decide to watch the audience, and I notice how instantly the attention of every single male and a hefty proportion of females follows this girl’s exposed thighs and knickers as she is carried out. It reminds me that, famous as we are, a bit of flesh and any random girl’s underwear holds more fascination than us (the hysteria-inducing Pop Stars) or our music.

Although from an evolutionary perspective, it is essential. If cavemen were to spend too much time listening to the medicine man humming in the cave instead of having sex, they would not survive for long. All this adulation could be dangerous. I once had to pull some girls off one of the group: some girl was holding his tie from behind and choking him, while some others were trying to cut off a bit of his hair as a souvenir, and a pair of scissors was being waved about dangerously in front of his face in this struggle.

In the summers of 1964 and 65, we play every Sunday night at Blackpool Pier. A feature of the evening is the Blackpool Pier Sprint Experience. The stage door is at the end of the Pier over the ocean at the furthest point from the road: we close the show and to get home we first need to get past the length of the theatre and an extra 200 metres or so of Pier to the road where the car is waiting. No helicopter is provided for the Stars, no large security contingent is on hand to protect us.

All this is not needed because we are operating the standard Blackpool Pier Exit Procedure, which has been operating for many years, to the satisfaction of the management. The crafty strategy is for us Stars to leave the stage immediately we finish playing, dash in panic at high speed down the Pier towards land and safety, hoping to be past the front of the theatre before the audience spots us.

The plan, sophisticated as it is, only partly works and every week we are chased by screaming fans. We then drive the 200 miles back to London, before the days of the M6 motorway.

The success is, for a while, an immense ego trip: all of us want to be important and I certainly feel important. In the beginning our new fame is a new and very exciting thing. It makes me feel significant. People want my signature, it is the Pop star dream come true. And we are living it. For a short while anyway.

We have become public property.

In my previous life as an ordinary member of the public, no one was interested in my thoughts; if I told a story or gave an opinion, people would leave the room, or their eyes would quietly glaze over. But in the new world I now inhabit, no one leaves the room, and in fact – lo and behold – journalists are actually taking it all down in little notebooks, and not just writing it, but writing it down for publication, for other human beings to actually read! Of course what they are reading is what we eat for breakfast, whether we prefer blondes or brunettes, and however trivial this stuff is, it does actually land up in an actual newspaper, alongside the value of the dollar or discussions on European integration.

I never thought I would pine for those shallow days, days of “What’s your favourite colour?” but after decades of self-regarding, self-important, Worthy Rock Musicians simplyifing the world’s problems and telling me which issues to worry about, and what to think, I yearn for the old days of “Do you prefer puppies or gerbils?”

Manager to pop star: “You have been asked to perform at a charity gig to raise awareness about Amerasia. The gig is in 9 months – are you available?”

“No, I was planning to watch TV that evening, anyway I’m not interested in Amerasia, especially if there is no money.”

“Hang on, let me explain. It is being presented by Rob Shmeldof and Mono, and will be watched by 100 million people, everyone will think you are a good guy and that you are a caring person. It will be tremendous promotion for the new album, you can’t buy this amount of exposure, and you won’t have to donate any actual money.”

Nine months later, TV announcer says to camera “And isn’t it wonderful, all the artists are donating their time free of charge!”